First Assembly of God, now over 100 years old, had an interesting and exciting beginning. In the fall of 1909, a lady evangelist, Mrs. Millicent Goss, and her husband Howard, came to Malvern from Texas. They immediately set up a tent on the west side intersection of Dyer and Main Streets, across from the building that was then occupied by J. B. Nunn’s General Store, and began revival services. This revival brought out people from all over the community because it had something new about it…the message of Pentecost. The revival fire caused a spiritual move in the community. There was a continual revival for almost a full year. The news spread fast with people coming to Malvern from all over the United States to hear the message of Pentecost. As a result of this meeting, a Pentecostal Fellowship was formed. 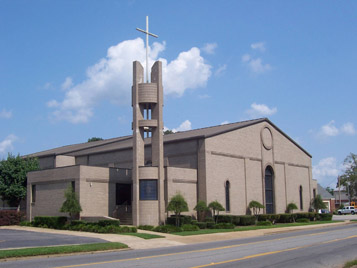 From this first tent location, two other tent locations housed the church meetings until a permanent location was secured. The other tent locations were on School Street and South Main Street, across from where the present church office sits. Not being affiliated with any denomination, the group of worshippers named the church “The Apostolic Faith Movement.” Within a matter of time, the property where the church is now located was purchased. On October 28, 1909, the present triangle of property was sold to the trustees of this church for $1. The first structure, a large one room wood-frame building, was erected in December 1909. It had large side window openings, covered with wooden panels which could be raised up for ventilation. It was complete with sawdust floor, wood heater, and kerosene lighting.

Those early years of the twentieth century witnessed a large growth in the history of the church. Many people were won to the Lord during these days. There were close to eighty-five charter members who signed the roster roll during the first months of the church’s beginning.

Rev. E. N. Bell came to Malvern to serve this group of people as their first elected pastor from January 10, 1910, until late 1914. Then Rev. A. P. Collins was elected, followed by his son-in-law, Rev. Hardy Mitchell. Rev. Fred Lohman was pastor from 1915 – 1917. In 1917, while Rev. Lohman was pastor, the fellowship voted to become affiliated with the Assemblies of God Incorporated, which was headquartered in St. Louis, MO. Rev. E. R. Fitzgerald was elected in 1917 and the church became known as the Assembly of God of the Apostolic Faith. During his pastorate the church was set in order with a charter membership roster roll being set.

The first official deacon board elected consisted of Walter Tillery, Johnny Clem, Mart Phelps, Oden Baker, and John Whatley. The first trustee board elected consisted of Marion Otts, Otelius Holst, and Murril Phelps. The first president of the Women’s Missionary Council was Mrs. J. A. Purdy. The first president of the Christ Ambassadors was Harold Helms. Blessing Bearers was organized in 1957 with Mrs. Arlie Hodges as president. Men?s Fellowship was organized in 1965 with Harold Grissom as president.

An interesting note concerning the church’s beginning: on two different occasions, pranksters placed lighted sticks of dynamite in different parts of the building, but the ignited TNT failed to explode!

Malvern became a strategic point in the history of the Pentecostal movement. It was here that Pastor E. N. Bell published “The Word and the Witness” which was a forerunner of the “Pentecostal Evangel.” The back of Mart Phelps’ grocery store was used for the purpose of printing the magazine. In 1914, Gospel Publishing House was established in Findlay, Ohio, and publication of the monthly magazine was transferred to that location. Soon afterward, it was merged with “The Christian Evangel.” In 1919, the magazine became known as the “Pentecostal Evangel.”

From “The Shed,” as the wood building was called, the congregation built an open-air tabernacle where they worshipped. It finally had to be closed in due to weather conditions. In 1927, during the pastorate of Rev. LaFayte Romines, the membership voted to build a larger auditorium, finding the tabernacle didn’t serve the present need of the people. Rev. Romines announced a work day with dinner on the ground, and the foundation was laid. The fourth house of worship was built, the red brick building. As the congregation grew, several Sunday School rooms were built on the back side of the church.

In 1938 the church experienced one of the greatest revivals in it?s history with evangelists J. W. Tucker and Murray N. Brown, who were prospective missionaries to Africa. There were between 135 and 140 saved, and 65 filled with the Spirit, and 49 joined the church. Rev. Claude Asher, who came to Malvern the 10th of July, 1937, was pastor at this time.

In April 1956, during the pastorate of Rev. John Paproski, the red brick building which was then 29 years old, was torn down and a new structure was began to be erected. A new building, completed in 1957, was constructed. Contemporary in styling, it had a pink Roman brick exterior design with cast stone. The auditorium seating capacity was 750. The church consisted of five assembly rooms, forty-four classrooms, a nursery, Sunday School office , and a pastor’s study. Valuation of the building was $250,000.00. The first service held in the new auditorium was on December 9, 1956. The church became debt free on August 18, 1963, when special services were held to burn the mortgage.

Rev. David A. Hastie served the church as pastor from 1966 – 1967, coming to Malvern July 17, 1966, from Ft. Smith, Arkansas where he had pastored Faith Assembly for several years. Then current board members were Irva Martin, James Pennington, Ray Jenkins, Harold Grissom, and Harold Helms. Secretary was D. W. (Doc) Hardin and the treasurer was Paul Bowdle. Trustees were Floyd L. Parker, Fred Sebren, and Elbert Coston. Active membership was 235, with the previous year’s Sunday School average attendance being 259.

Because of continual growth and the need for additional ministry to children and youth, the two-story Educational Building was built in 1974 under the pastorate of Rev. Larry Moore. In 1988, Pastor Moore had the two-story sanctuary building completely remodeled. Not only did this add more room, but also enabled the start of televised services, allowing those throughout our area to share the ministry of First Assembly of God. A sixty-nine foot tower and installation of stained glass windows enhanced the beauty of the building. It appears the same today with the exception of the pitched metal roof.

The first parsonage was built during the pastorate of Rev. Fred Lohmann between 1915-1917. The second parsonage (the present office building), was built in 1947 during the pastor-ate of Rev. G. E. Chambers. Rev. Chambers lived in it only a short time, leaving Malvern to pastor First Assembly in Hot Springs, AR. It replaced the old one that was sold and moved across the street on East Highland Street.
Today, the present property of First Assembly of God consists of the two-story church building, two-story Educational Building, the church offices, the bus parking lot, a house, and thirty-two acres of property on Tanner Street which was purchased for the relocation and con-struction of a new facility. On the Tanner Street property, a building has already been built which consists of rooms for our youth group to hold weekly services, an open-air pavilion, and a shop to store equipment in.

From its small beginning 100 years ago of a congregation of people, numbering less than 100, First Assembly of God has stood firm as a lighthouse to the community, the nation, and to the world. From this powerful church God has called many men and women into full-time ministry…becoming evangelists, pastors, teachers, and missionaries; all who have helped to spread the full-gospel message around the world. Multitudes of lay people have found their place in the kingdom of God.

Now, over 100 years later, Pastors Jimmy and Kathy Bobo, the Ministerial Staff, Board, and Congregation of First Assembly of God are looking to the future for what great plans God has in store for us. The best is yet to come.